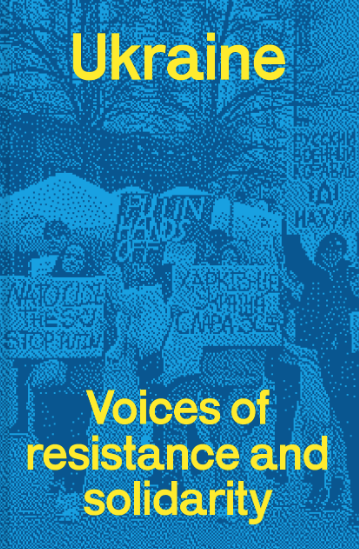 UKRAINE: Voices of resistance and solidarity

A collection of recent writings by Ukrainians and socialists around the world.

This is an extremely important book published at this tragic moment when our country has been invaded. It builds a bridge of solidarity between the people of Ukraine and the working class around the world. The contributions make it easier to imagine a better future without imperialism and injustice.

Ukraine: Voices of Resistance and Solidarity is a contribution to understanding what Ukrainians think, feel and need. Their voices are a call for solidarity, peace and progress. Above all, it is about the Ukrainian people deciding their future and an end to Russian imperialism.
Mick Antoniw, Member of the Welsh Parliament.

Mick Antoniw is the Labour member of the Welsh Parliament for Pontypridd, a second generation Ukrainian and trade union lawyer.

John-Paul Himka John-Paul Himka is a professor emeritus of History at the University of Alberta, Canada. He has published extensively on the history of Ukrainian socialism.

Taras Bilous is a Ukrainian historian, an activist of Sotsialnyi Rukh/Social Movement, and editor of Spline/Commons (Journal of social critique).

Oksana Dutchak is co-editor of Spilne/Commons (Journal of social critique).

Yuliya Yurchenko is a member of Sotsialniy Rukh/Social Movement and the author of Ukraine and the Empire of Capital: from Marketisation to Armed Conflict (Pluto Press, 2017).

Eric Toussaint is the spokesperson of the CADTM International. His books include Debt System (Haymarket books, 2019), Bankocracy (Resistance Books, 2015).

Vitalii Dudin is President of Sotsialnyi Rukh/Social Movement. He researches the impact of neoliberal reforms and the social consequences of European integration.

Bohdan Ferens is a founder member of the Social Democratic Platform.

Ilya Budraitskis is a member of the Russian Socialist Movement. He is the author of of Dissidents among Dissidents: Ideology, Politics and the Left in Post-Soviet Russia (Verso, 2022).

Niko Vorobyov is a Russian-British freelance journalist and author of the book Dopeworld (Hodder & Stoughton, 2020).

Gilbert Achcar is a Lebanese socialist. His books include The Clash of Barbarisms: The Making of the New World Disorder (Routledge, 2006) and Morbid Symptoms: Relapse in the Arab Uprising (Saqi, 2016).

Simon Pirani was the editor of the British mineworkers’ union journal (1990–95) and his books include Change in Putin’s Russia: Power Money and People (Pluto Press, 2010).

Stephen R. Shalom and Dan La Botz are both socialists and editors of New Politics, an independent socialist forum for dialogue and debate on the left, based in the USA.

Transphobia is the Feminism of Fools

The rich make us pay for their profits! Let’s mobilize against the rise in the cost of living